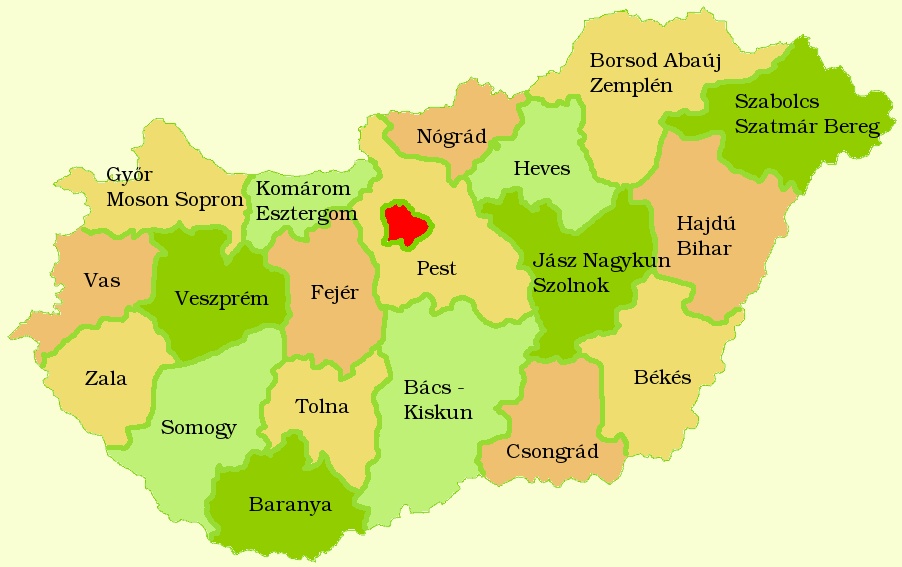 Hungary is divided into 19 Counties. One of the county (Pest) include the capital Budapest, the area of Budapest filled with red color.

In the following section I discuss each areas about turistic importance, most interesting targets, what to see, what to do, geography of the regions etc. I concentrate on tourism, but many add notes about economy and other things as well. Later there will be separate pages for each counties with lot more details. This page is for the clever ones, who will know, and understand much more about the country in context.

The counties of Hungary are the following:

Baranya county is located in South Transdanubia, see the map above for exact position. The center of this area is Pecs which is a little mediterranean little Turkish city in this nice hill area. Pecs has about 150,000 inhabitants. The surrounded area covered with forests, nice lakes, caves, beautiful villages can be found here. Quite a nice place for tourists.

Bács Kiskun county is located South between Hungary’s two main river, the Danube and the Tisza. The area is flat and mostly sand covered. It is a good news here especially for tourist, otherwise it would be a same boring agricultural land than other huge areas of the country. The main natural values here are the salty lakes, which in summer sometimes dried up, but gives home to many endangered bird species. Many areas belong to the Ksikunság national park. Other popular activity here is horse riding, there are many farms waiting for it’s visitors. There are many hot water spas as well. There are some really nice abandoned places here as well, with low quality roads, which I particularly like (keep the masses away, which helps to maintain the nature). The biggest city is Kecskemét in this area, where there are several nice buildings to see, there are several museums, a new botanical garden around the city.

Békés is located in the far Southeast part of the country. most tourists even in Hungary not go so far. The area is flat but quite nice. Gyula is a spa city with a unique brick Castle, and lots of programs during the year which is the hotspot of this area near the Romanian and Ukranian border. Several middle sized rivers also can be found here, there are nice protected natural areas of the Koros Maros National Park, next to these rivers.

Northeast part of the country mainly covered with hills and forest of the National park. Some very nice places like Lillafüred Miskolctapolca can be found here, caves, beautiful forests, lakes. For nature lovers.

Csongrád located in the Southeast part of Hungary. The main city is Szeged here the home of Hungarian paprika and Pick salami divided by the River Tisza. Flat area with lots of sunshine.

Fejér county is located little South from Budapest. Szekesfehervar is a former coronary city worth to look at, with it’s several nice buildings, the Castle of Jenő Bory, who was a sculptor/architect.

Győr the main city here is very enjoyable with it’s several rivers, Spa Complex and University. Sopron “the faithful city” is also a very nice place near the Austrian border, with many interesting building, nice nature, and high quality food.

In Hajdu Bihar county the most interesting places are Hajduszoboszlo with the biggest Spa complex in Europe, Debrecen the second biggest city in Hungary, and the Hortobagy plains Unesco World Heritage site.

Heves is a popular destination with the Charming Historic city of Eger with it’s Castle fortress, Wine cellars, Mosque and Spas. Nearby in the wally there are other three important spa cities: Egerszalok, Demjén and Bogács.

Half of the area of Szolnok is an agricultural land. Turistically most interesting is the beautiful Lake Tisza here.

The beautiful unique Danube bend can be found here, which is 80km section of the river and the surrounding 900-1000m hills. Most area is part of the National Park.

Nógrád is located in the Northern hills, but not as visited as the higher parts of the area.

The Capital city is the center of this county.

Szabolcs Szatmár is perhaps the least visited part of the country. Can be a good news for nature lovers. Some really nice rivers, and villages can be found there, and the one and only remaining Mud fortress.

Somogy is perhaps the most forest covered area in Budapest. There are huge forests there, and the beautiful River Drava, the historic Szigetvar and several nice spas as well. Mostly small villages, little towns and several mid-sized towns can be found here. Some places looks like the time has stopped, there are abandoned houses in some villages as well. The area of the county is quite big in Hungary terms.

Zala is located at the far Southwest part of the country. Nice places forests, small hills little villages. There is a very nice spa in Zalakaros.